When you look back to your childhood memories,
is learning your
multiplication facts
one of your favorite memories?
Yea, me neither.
When Rebekah had to start learning the facts
in second grade,
I fussed a little.
“It’s too early!
I didn’t learn them until the end of third grade!”
At the beginning of third grade, Beka and I were back to the
multiplication tables.
I used flashcards.
I used speed drills.
I used the chalk board.
I used the marker board.
It still wasn’t working.
I had to pull out all the stops.
I didn’t major in Cut and Paste for no reason,
I love me some cutting and pasting.
While Rebekah was working on the math worksheet,
I began crafting. 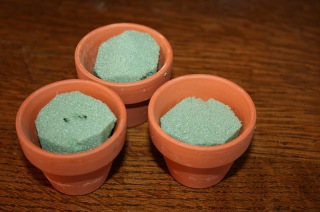 Thirteen little claypots were fitted with a green flower  foam.
Since I found a shoebox full of these beauties for $2
at a thrift store, it made the idea affordable.
I love a good deal!
The flowers could also be tucked into wooden spools,
paper flower pots glued into a file folder
or just lined up on the floor.
Do what’s easiest, fastest and/or cheapest for you.
If you’re starting out homeschooling,
you might want to make them super fancy.
If you’re on your last child, like I am,
you might want to tone the project down. 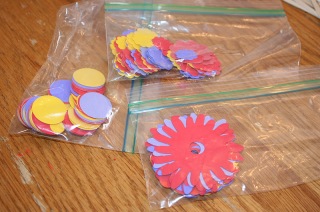 These bags of flowers and circles were in my scrap drawer.
Recognize them?
I used them to decorate for Grace’s graduation last May.
First I cut them,
then I made a garland and cupcake picks,
then I glued them on little Chinese take-out boxes.
Because I waste not, want not,
I had extra flowers I didn’t waste, and I wanted,
so I was able to make a quick craft out of them. 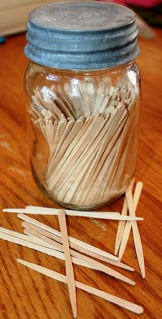 These flat wooden picks were bought two years ago,
when I first birthed the idea of flower manipulatives.
I just never got around to doing anything with them.
Better late than never. 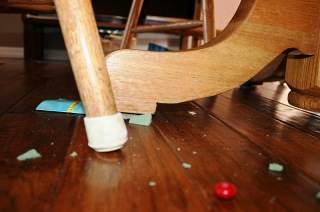 A commercial break to show you my dirty dining room floor.
That stuff will most likely be there tomorrow.
Except for the M&M.
I heard someone cry out in delight with the find
and they promptly ate it.
The guilty shall remain nameless because I know you’re totally grossed out.
Your family might have the 5 second rule,
we have about a 5 hour rule.
OK, I’ll be honest, it’s a 5 day rule.
Yea, yer’ right, it’s really like 5 months.
Hey, candy is candy! 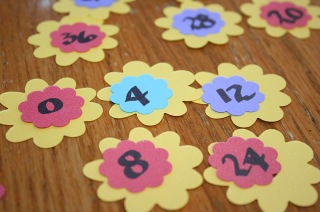 The first set of flowers are for counting by 4’s.
Remember how Skipper helped us skip count?
This is a skill crucial to learning multiplication facts. 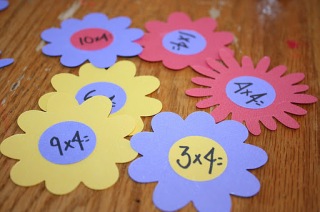 Another set of flowers became the math facts.
I didn’t use a particular color pattern,
kids can pick up on stuff like that and match answers
according to patterns, not the answers.
If you’re an OCD Type A person,
it might drive you crazy to not have the pattern
yellow, purple, red, yellow, purple, red.
C’mon, loosen your rubber bands, girlfriend!
It’s about learning.

Calligraphy pens work great when I really don’t have time
to fuss with fancy lettering,
or the money to buy many packages of number stickers. 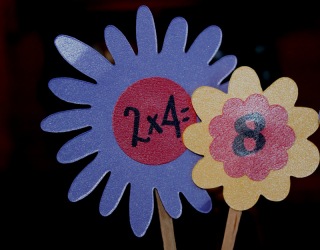 As soon as I had them glued together,
Rebekah started matching flowers in the little flower pots. 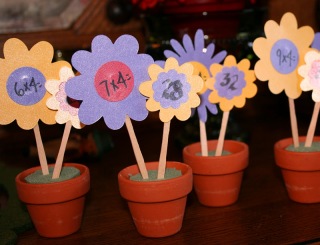 Lined up along the buffet in the dining room,
they made a bright spot in math class.
*****
There are a lot of improvements that could be done:
-bright trim along the top edge of the flower pot
-spanish moss to cover up the foam
-paint the wooden stems green
-add leaves to the stalks
*****
Flowers can be made for each number family.
*****
Flowers can be made to show all the math facts with the same product.
24
1×24
2×12
3×8
4×6
6×4
8×3
12×2
24×1
*****
Number flowers could be used to separate
even from odd
numbers.
*****
I have a feeling this project could impact our math class.
Maybe,
just maybe,
she’ll learn her
multiplication facts
by heart.
And maybe,
just maybe,
someday learning her
multiplication facts
will be one of her fondest memories.